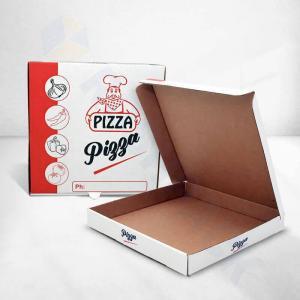 The white pizza box is made of 230 gsm white Duplex and inner two layers of 100 gsm semi-kraft each..

The white box is the common box used for pizza packaging. Restaurants put their own stickers on the top lid for branding. 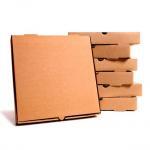 The brown pizza boxes are made of 180 gsm Kraft and inner two layers of 100 gsm and 140 gsm semi-kraft respectively. These boxes are rigid and light.

The brown box is commonly used for pizza packaging with single color branding on the top lid.

Pizza is a savory dish of Italian origin consisting of a usually round, flattened base of wheat-based dough topped with tomatoes, cheese, onion, paneer, chicken, and often various other ingredients.

The pizza box or pizza package is a folding box made of cardboard in which hot pizzas are stored for takeaway.

The printed pizza box is supposed to allow the transport of a baked pizza with the minimum loss in quality possible.

This means the box has two tasks to fulfill that are not easy to combine: On one hand, the box should insulate as well as possible against the cold air outside, the occasional wind and heat radiation, in order to keep the pizza warm.

To reduce heat flow the box has to close as firmly as possible to keep the warm air inside. Consumers consider a temperature between 70 and 85°C to be ideal for pizza consumption. 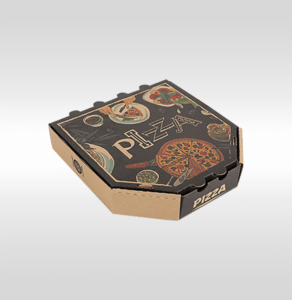 The upper layer is of White Duplex printed with the Company’s name and Brand.

The corrugated pizza box has to be highly resistant, cheap, stackable, thermally insulated to regulate humidity, and good for food transportation. In addition, it provides space for branding.

Most packaging for the transport of pizzas is made of cardboard sheets, as this is both cheap, easy to work with, and lightweight while maintaining proper structural integrity to hold and deliver pizzas.

Both solid cardboard and single wall corrugated board are used. The corrugated cardboard in use is often of the E flute size, but thicker B flute cardboard is also used. 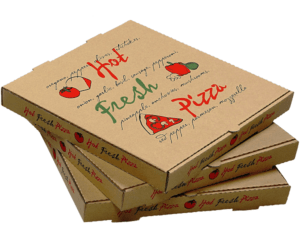 You can order online many types of customized pizza box as per your requirement.

Generally, Mailer style boxes are used in the packing of Pizza Packaging Boxes. 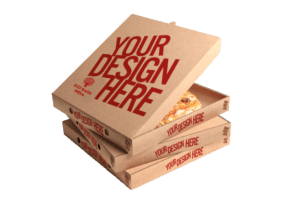 Containers to deliver freshly baked pizzas have existed at least since the 19th century, when Neapolitan pizza bakers put their products in multi-layered metallic containers known as stufe (singular stufa, “oven”) and then sent them to the street sellers.

The aerated container was round and made of tin or copper.

Disposable packaging started to be developed in the United States, after the Second World War. At that time pizza was becoming increasingly popular and the first pizza delivery services were created.

In the beginning, they attempted to deliver pizzas in simple cardboard boxes, similar to those used in cake shops, but these often became wet, bent, or even broke in two.

Other pizza chefs tried to put pizzas on plates and transport them inside paper bags. This partly solved the problem.

However, it was almost impossible to transport more than a single pizza inside one bag. In this way, the pizzas on the top would have ruined the surface of the others.

The first patent for a pizza box made of Corrugated Cardboard was applied in 1963 and it already displayed the characteristics of today’s pizza packaging: plane blanks, foldability without the need of adhesive, stackability, and ventilation slots.

The combination of such slots along with water vapor absorbing materials (absorption agent) prevented the humidity build-ups that characterized traditional transport packaging. 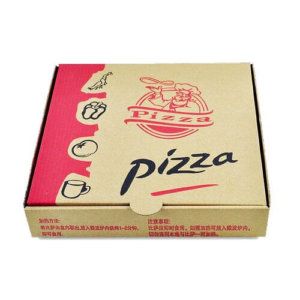 Our pizza box is made of corrugated cardboard; its ribbed structure insulates the product and retains its heat. 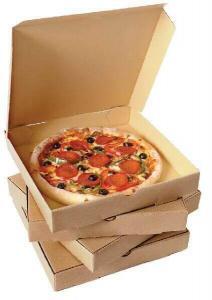